The History of the Vamo Lodge

Acquired by Sarasota County in 2018 as part of the passive park, the Vamo Lodge is currently the focus of neighborhood residents and many in the preservation community. Predating most structures remaining in Sarasota County, the Vamo Lodge (sometimes referred to as the Vamo Hotel or Casino) was the social hub of the southern coast line. 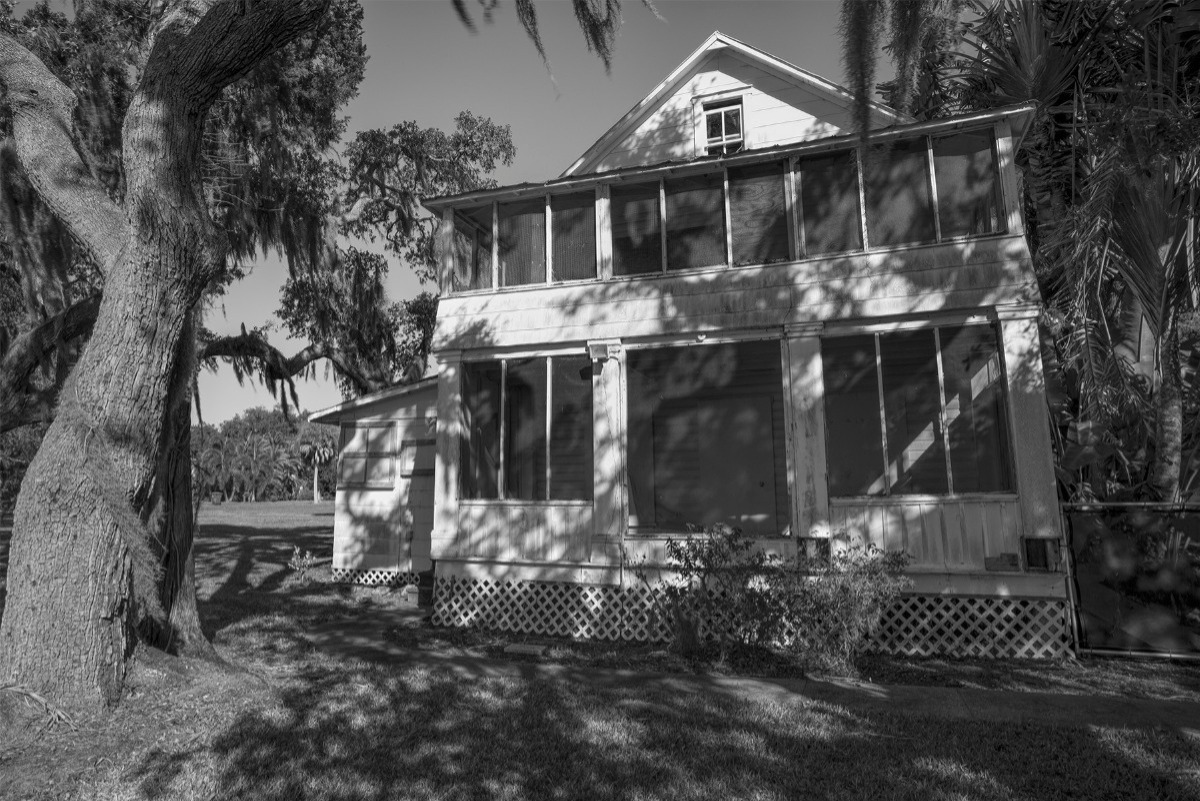 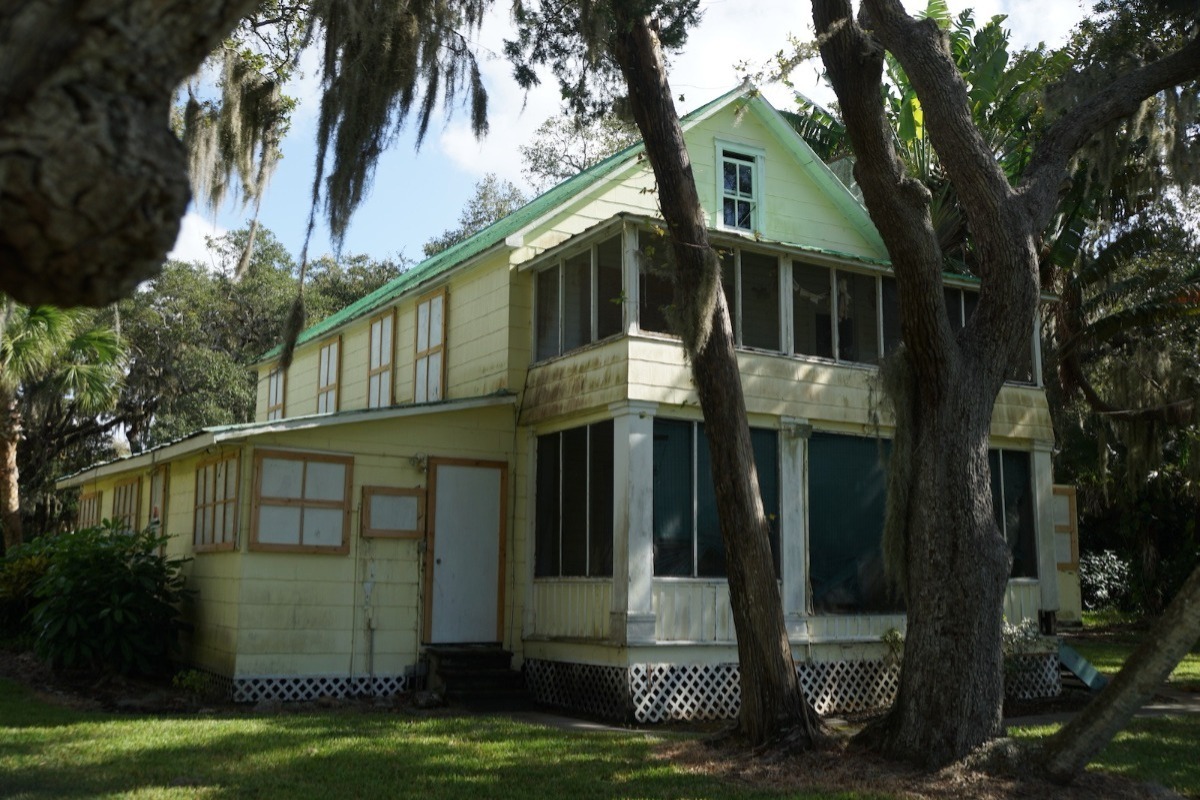 “Settled among spreading live oaks, the [Lodge] building gazes out over the water through its screened porches. Surrounded by exotic palms, clumps of bamboo, citrus trees and a variety of flowering shrubs…the lodge with its green tin roof, white walls and big brick chimney, seems to be pondering the many years of southern hospitality which has been extended to its guests over the last half-century.” Randy Matthews, Sarasota County Historical Resources

At the turn of the century, when Sarasota was still part of Manatee County and the area south of Sarasota was still known as Bayonne, J.B. Surgnier purchased a plot of land on the little Sarasota Bay and built a two story wood frame house with 8 bedrooms for his family. Fishing was the primary industry in the area, and life revolved around the water. In 1909, the property was purchased by Dr. J. B. Mobley, a family physician, who lived and worked there with his wife and children. As of 1912, it was still known as Surgnier’s place as seen in this advertisement for Dr. Mobley’s services.

At some point in the next 10 years, the home changed ownership at least once, likely to a well known newspaperman, Mr. W. B. Beatty, who hired a manager and began running a hotel or lodge out of the home. In 1924, Mr. A. A. Wren visited Sarasota in search of a location for investment. When he stood before the lodge building, he later reported “One view of the bay front at this point was enough…for here his clients could get all out of life there was in it, fishing, bathing, boating, and the wholesome quiet that the city denied its inhabitants.” Sarasota Herald, January 17, 1926.

Shortly after that first visit, Wren settled into the Vamo Lodge and created an office in one of the rooms. Teaming up with Bessie P. Gibson, the VA of the Virginia and Missouri duo from which the town’s name is derived, they began entertaining ‘delegation(s) of Virginians’ at the lodge’, and writing up contracts for the plots of land the developers had drawn up. “Stopping temporarily at the Vamo Lodge, many of the party vowed their intentions of coming here to make their permanent homes after discussing with each other the sights to which they were treated after their arrival to the land of eternal sunshine.” Sarasota Herald, November, 23, 1925. 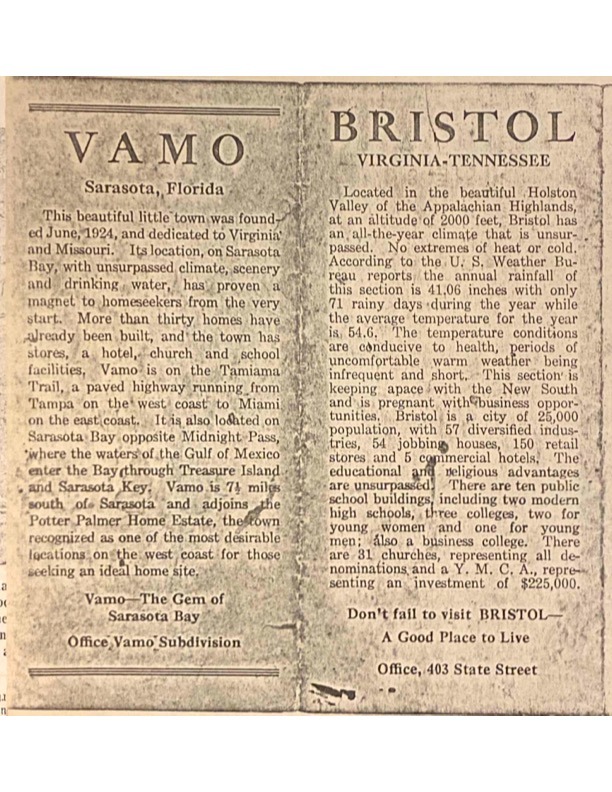 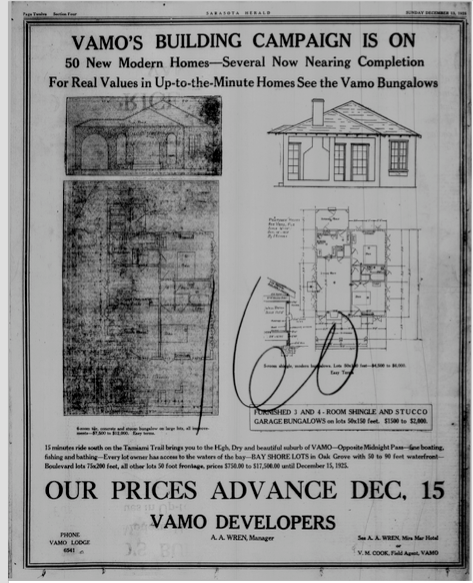 Wren and Gibson began advertising the bungalows in the paper as several neared completion. The well on the property of the Lodge provided what Wren referred to as ‘superior’ drinking water for the homes. 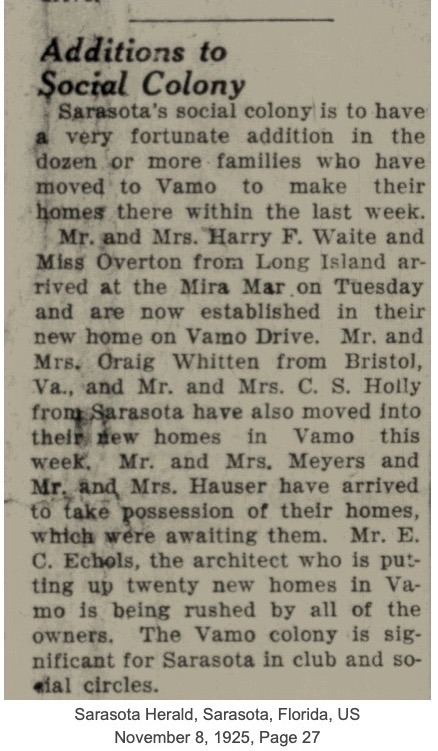 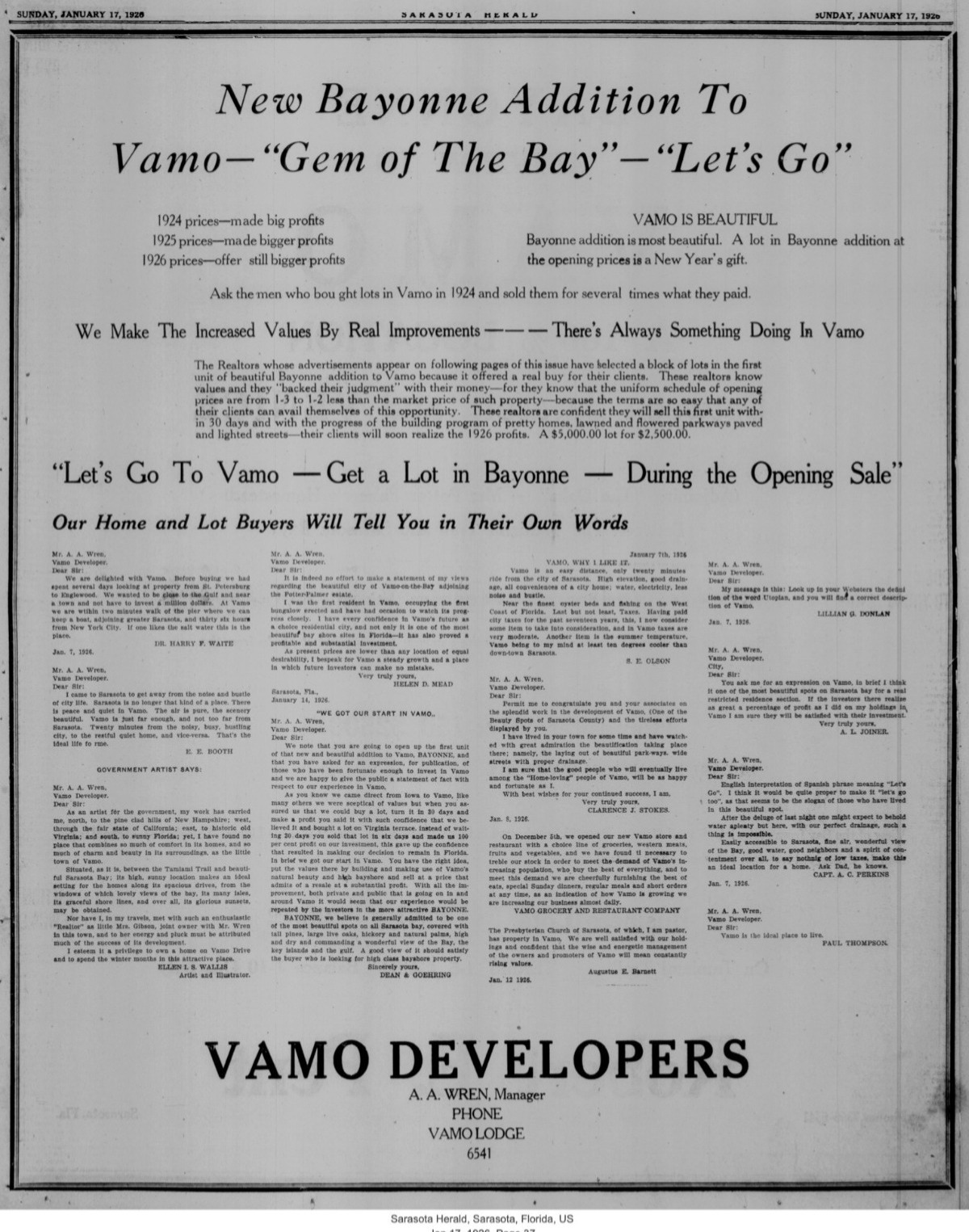 By 1926, Vamo development was in full swing. On January 26, 1926, the first elections were held and A. A. Wren was officially elected as City Manager. The Vamo Lodge, continued through the boom time and beyond as the social epicenter, with rooms rented out at $5 per week, and frequently meetings and community events on the grounds. 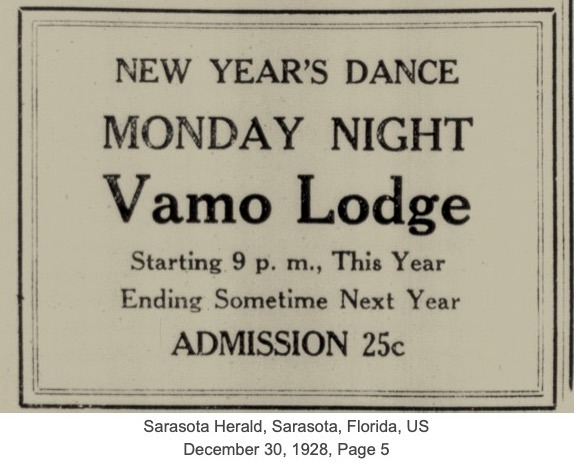 Vamo felt the real estate bubble burst along with the rest of Sarasota when the depression hit. The area became somewhat of a ghost town, and then in 1946, the Vamo lodge was purchased by Norma and Jack Martin as a private residence, and it was from them that the County acquired the historic building. “…It looks pretty much the same except for the removal of the dance floor and some minor renovations. At that time, it was the focal point of social activity: dancing, dinner, or even a night’s rest in one of the eight bedrooms. Many came by boat, since the lodge edged the bay, while others strolled down the 31-foot-wide promenade provided on either side of Vamo Drive, Mrs. Martin said.” Solders, Sarasota Journal, April 18, 1978. 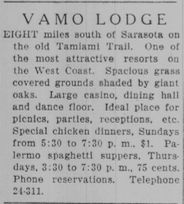 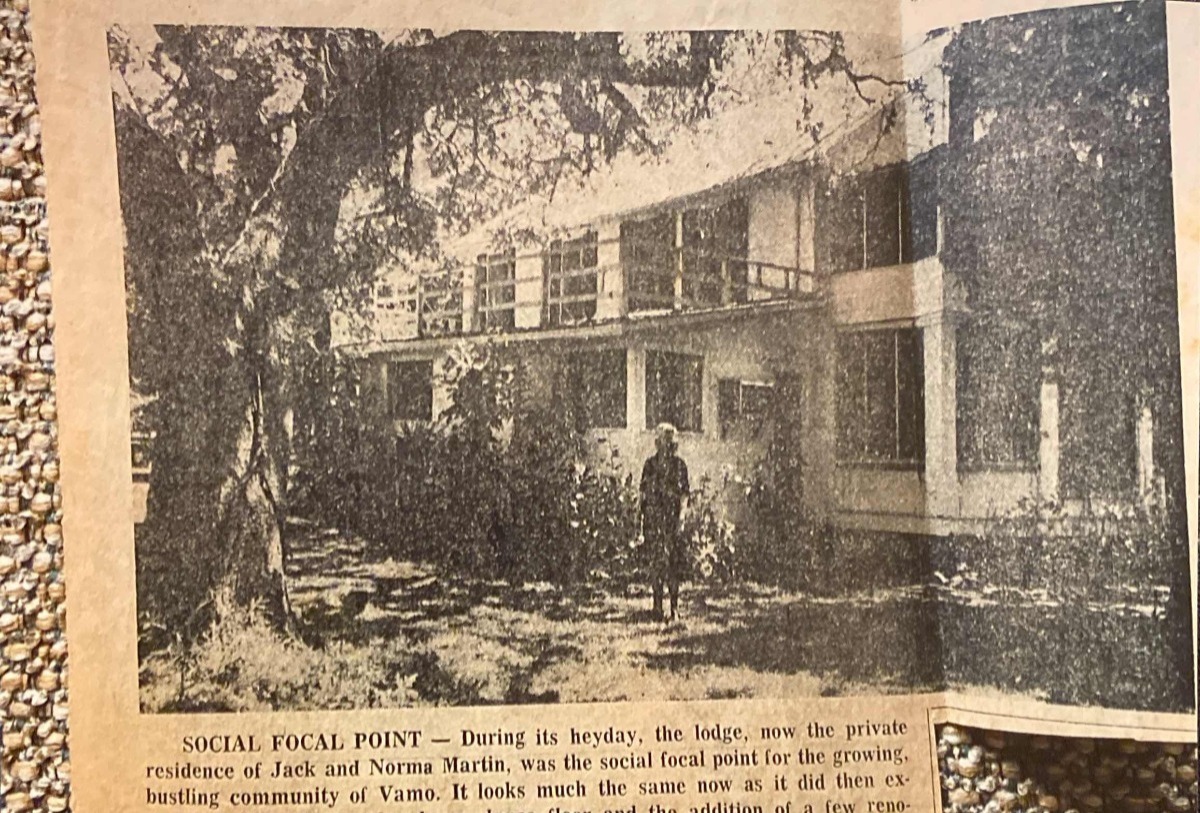 It is now up to us to ensure that this historic structure which so beautifully and profoundly reflects the way of life that residents ponder with nostalgia, as well as the welcome of those new to our shores. Without our history, we cannot know where we come from, nor where we are going.